In Texas, more than anything, the arrival of fall means one thing: football is back.

From high school’s Friday Night Lights (a term that, of course, originated here in Texas) to college football’s Saturday showdowns to the beloved Dallas Cowboys on Sundays, Mondays and Thursdays — the Dallas-Fort Worth Metroplex schedule is FULL of football.

You might have already been watching eagerly as the Cowboys have taken on the Giants, the 49ers and the Seahawks. You might have even made it out to tour AT&T Stadium — the Cowboys’ home base, affectionately known as “Jerry’s World” due to Cowboys owner Jerry Jones’s dream to make the complex the DFW Metroplex’s entertainment hub.

But one angle on your fall football favorites that you likely haven’t seen is the aerial view.

With the Longhorn Helicopters Metroplex Experience helicopter tour package, you have the opportunity to see the turf from the vantage point of a helicopter’s passenger seat hundreds of feet in the air.

Here are a few fun facts about the Cowboys’ stadium to keep in mind during your flyover:

You know how the saying goes: “everything is bigger in Texas.” That is absolutely true when it comes to the AT&T stadium. This facility’s size stretches to 3 million square feet.

The two center display high-definition screens are famously huge, sitting at 160 by 72 feet (for a total surface area of 25,000 square feet). Each unit weighs 1.2 million pounds, and at the time of their initial installation, the screens were the largest high definition displays in the world. There over 3,000 additional smaller LCD screens throughout the structure.

Most stats will tell you that the arena seats 80,000 visitors, but that’s not strictly true. 80,000 is the number of seats, but standing room only decks bring the actual total capacity to well over 100,000. 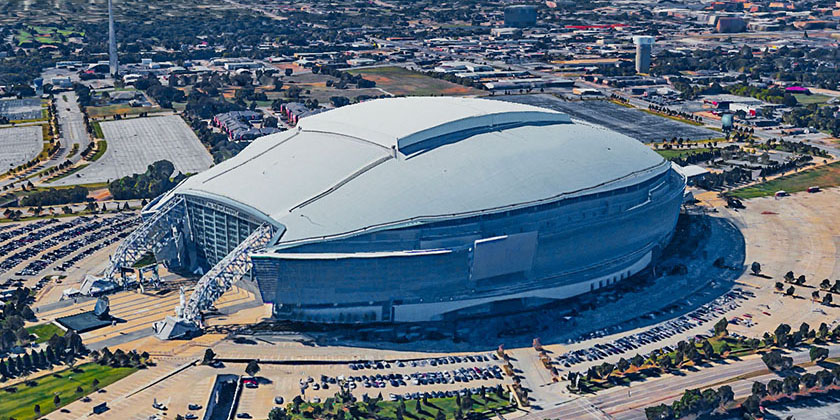 Depending on the day you fly over, you’re going to see either green grass — or a jaw-dropping steel dome. The stadium was designed to be either fully covered or else open to the elements through Texas’s mild football season weather. That meant installing a retractable roof that continues to be a widely respected engineering feat nearly a decade after its completion.

The roof is 105,000 square feet, comprised of two panels that weigh 1.68 million pounds each. With that kind of weight, you might expect opening and closing it to be an ordeal.

In actuality, the state-of-the-art design allows it to retract in just 12 minutes.

More Than the Game

In addition to the massive stadium, the AT&T Stadium is basically a museum that pays tribute to the game of football, full of facts, figures and trivia posted throughout the facility. It also hosts an impressive art and architecture collection.

In fact, there are so many art pieces housed in the stadium that one of the stadium tour packages is purely art-focused. While most of the painted and sculpted art isn’t going to be visible from the air, you’re like to catch glimpses of the award-winning architecture.

There’s an App for That 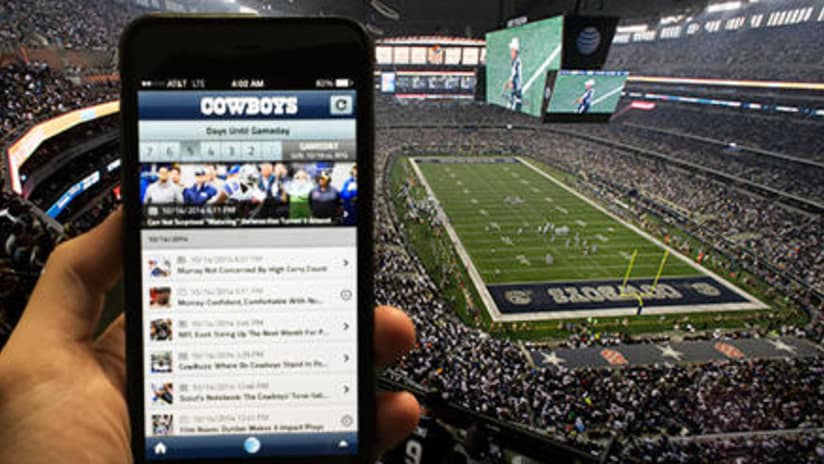 As you’re marveling over the stadium from your birds-eye view, you might have questions about the facility. Good news: they have an app for that. You can download multiple apps from the Dallas Football Club developer, offering guides to game schedules, the facility itself and even one specifically for the above-mentioned art collection.

Are you ready to see this Texas marvel for yourself? It’s so big that the only way to take it all in at once is from the air. Book your flight today with Longhorn Helicopters!